The Dolmen are a relentless organic Celtic rock band born from the county of Dorset, England. Their mission has been to infiltrate the minds and souls of a growing audience with their tribal rhythms and powerful spiritual renditions. The band was founded by prolific song writer & lead singer, Taloch Jameson and after a few changes over the years, the current line-up has been solid
since 2010 when drummer, Chris Harris, joined The Dolmen experience. Josh Elliott, lead guitarist, joined The Dolmen family in 2009 and Kayleigh Marchant, bass guitar & vocals, became a member in 2008. After breaking into Europe The Dolmen then found Anja Novotny, flutes & keyboard, in 2015. An all original set both musically and character-wise, their pumping rhythms derive from the best ingredients of Celtic and deep Tribal Pagan Rock. All songs are self-written with some Traditional Celtic Ballads thrown in for good measure. 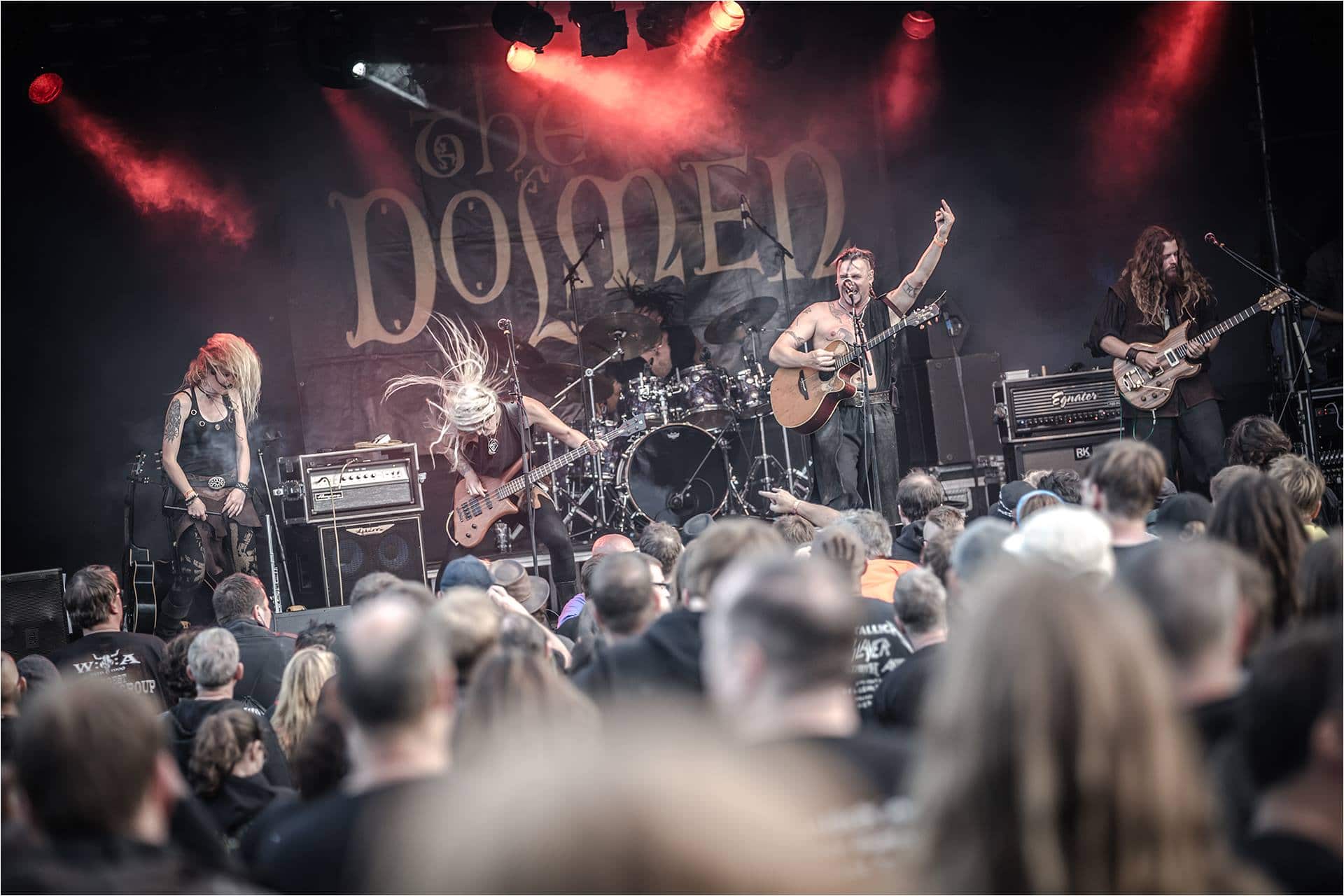 Check out the ‘Free Will’ Video!

In the past year when Covid stalled the world the band did not lose any touch with their faithful supporters, they put all their energy in a Patreon site in which they performed live for two hours every Thursday evening and they regularly uploaded live gigs and video clips on their YouTube channel and thus kept reaching out to their supporters and in the process gained new ones.

In a review of “Festivals For All” this was said about The Dolmen 2019 performance at Lakefest;

“Those who could not drag themselves away from headliners Kaiser Chiefs, missed the real party. The proper action was over on the Floating Globe with the pagan shenanigans of The Dolmen. New to FFA, these Celtic folk-rockers were up there vying for set of the festival. A stunning high energy maelstrom of sound and movement, with their mystical ethos and fine musicianship producing one big headlong rush. A cracking band and fabulous stuff”

The strength of The Dolmen is in its pure organic feel. To be able to react spontaneously to the way that the mood and the spirit takes you when on the stage. To be one with the audience. Although, it is not only their relentless on-stage energy that sets apart, it is also that kind of organic freedom, last experienced in the late 60’s and early 70’s. Their two latest albums Nuada and Wytches & Cunningfolk won successively in two years in the Dutch Fantasy Awards and they were nominated for Best Online Act with their Patreon performances for this year in these same Dutch awards. Part two of the Wytches and Cunninfolk album will be released this summer. The Dolmen continue to grow as they take off on their journey into ever expanding territories.

the dolmen will be playing our main stage at Lakefest 12-15th August 2021. Don’t miss out and get tickets now!